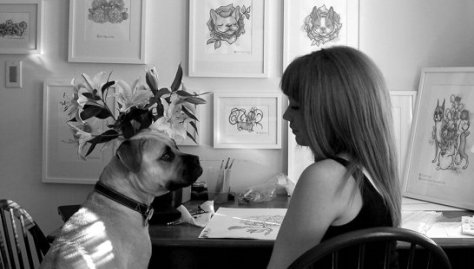 What: Exhibit of Lindsay Campbell’s Canis Flora collection of artwork.
Where: The Wurm Gallery at the Invisible Cinema; 319 Lisgar St., Ottawa, ON, (613) 237-0769.
When: Opening night reception August 10, 8 pm. Show runs until September 12th.

Ottawa’s Wurm Gallery is gearing up for the opening night of its exhibit of Canis Flora, a lighthearted and fun series of artwork by Montreal-based artist and animal liberationist Lindsay Campbell. 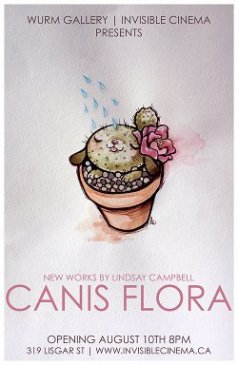 The series depicts strange hybrids of dogs and flowers. In the artist’s own words: “I drew some characters after I was approached for this show; one of them being a spaniel surrounded by blossoms. I pushed it further and suddenly the flowers were an extension of her fur, and quickly became ears. I loved it and started drawing dog-flower hybrids. Boxers with clumps of cacti growing from their backs…Newfoundlands sprouting water lilies while they swam…even a bouquet of Chihuahua hydrangeas. The best part was pairing up different dog breeds to species of flower. I tried to match up similar shapes, textures, and personalities. I saw pansies in the flat faces of Shih Tzu and bunches of lilacs in the curly coat of a Poodle. The possibilities were endless and addictive. All species, be it plant or mammal, share a collective heart and spirit under God…so it wasn’t difficult to find similarity and flow between them.”

The show runs for a month, but we encourage everyone to drop in for the opening night reception on August 10th. Chat with Lindsay while enjoying some drinks and delicious vegan treats!

More details can be found on the facebook event page!